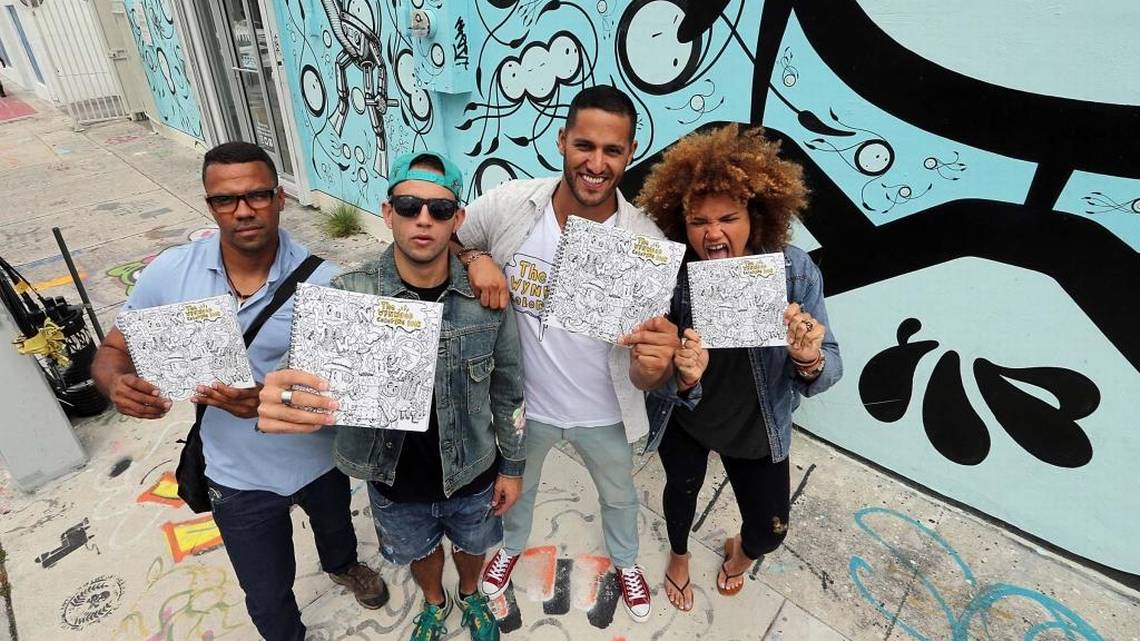 When Diego Orlandini, creator of The Wynwood Coloring Book, painted pages in an adult coloring book for the first time, he never imagined he would publish his own in less than a year.

He was simply trying to relax.

“I was speaking to my ex-girlfriend, who was in Holland, and she could sense that I was stressed,” said Orlandini, 30, who recently published the 64-page, 8-by-8-inch adult coloring book that features the work of 45 local and internationally renown artists.

“So, she sent me a coloring book through the mail and told me to try coloring a few pages. … I didn’t really look at it at first but one day I said, ‘OK, I’m going to try this’ and that’s when I discovered how fun and how addictive it was.”

Orlandini’s experience, however, is not unique.

But why the drastic increase?

Some, including Orlandini, point to new studies that tie coloring to anxiety and stress reduction.

“Even meditating, it takes a certain amount of effort,” said Orlandini, who moved to Miami from Lima, Peru, three years ago and now lives in Midtown.

“But with coloring, it’s effortless. You can just open a page and start coloring. You can take your mind off all your problems and it’s very therapeutic.”

What The Wynwood Coloring Book creator did not find as relaxing, however, were adult coloring books that featured mandalas or pages lined top-to-bottom with small, intricate details.

“I thought the pages were complicated and never-ending in repetition,” he said. “I really didn’t like coloring those type of designs so, one day I was having a conversation with my friends and we talked about it and said ‘Hey! Wouldn’t it be cool if we could color something more interesting and more familiar, like Wynwood?’ and that’s kind of how the idea was born.”

That was last June. Now, almost a year later and thanks to the donations of 127 backers who raised more than $5,000 on its Kickstarter campaign, the concept that was drawn up rather casually is a reality.

Books & Books marketing and events associate Stephanie Fernandez said more than half of the 50 Wynwood Coloring Book copies bought by the company at the end of March have sold.

“Clearly, there’s a lot of interest and demand for adult coloring books, nationally as well as at a local level,” Fernandez said.

“At this point, I don’t even think it’s a trend anymore. Our customers have said they find the book very interesting and some have even said they’d like to see other parts of South Florida featured in an adult coloring book, so, I wouldn’t be surprised to see a Coral Gables or Miami Beach coloring book in the future, and at Books & Books, we love to support local projects, so we’re hoping to see more.”

Lia Seirotti, blogger of “A Girl in Her Thirties,” lives in the Miami River District and agrees with Fernandez. She bought a copy of The Wynwood Coloring Book and says she definitely sees herself buying more.

“I consider myself a street art enthusiast,” said Seirotti, who is also a global teacher at Academica Virtual Education. “And coloring is one of the things I miss most about teaching kindergarten, because it’s very therapeutic, but what appealed to me the most about it was supporting local art and finding an easy way to be visually creative.”

Books & Books’ Coral Gables location recently held an Adult Coloring Book Happy Hour, an event Fernandez described as “a total success,” in which coloring book lovers like Seirotti could relax while drinking beer and sharing colored markers. Similar events will be scheduled at the book store later this summer.

Kendrick Vasquez, 27, founder of HGAB magazine, an online magazine and media marketing company, has supported Orlandini’s project from day one as an official marketing sponsor.

“It’s a great community project,” said Vasquez, who created videos and marketing materials to promote the product on social media.

“I knew the content of the coloring book was going to hit home and I really feel passionately about it because I mean, this is my backyard. People from all over the world come here because they want to experience what is Wynwood but now, those people, who don’t live here can take a piece of Wynwood home with them.”

Orlandini says the coloring book, which was published by Aimful Media and features artists The London Police, Alex Senna, Alexander Mijares, Diana Contreras, Jason Botkin, Jenny Perez, Jim Mahfood, Alice Mizrachi, Chris Riggs and GG, among others, is also a way for artists to get exposure because it includes an artist directory.

However, Gabriel “GG” Gimenez, 26, a local artist whose work was featured in the book, says exposure was not his motivation to participate.

“The Wynwood Coloring Book captures a very special moment in the growth of the city,” Gimenez said. “As an artist, being featured in it, represents that I’m part of that growth and that makes me feel proud of what we have all accomplished as creatives.”

Orlandini adds: “People come to Wynwood and they take pictures of the murals but they don’t really know the artists or how to connect with them. … The book offers a way to preserve the legacy of the murals because they’re only up for a few weeks or months before they get painted over and there’s always new murals so, the possibility of other editions of the coloring book is also there.”

His niche marketing approach may be right on the money. Other newcomers in the world of adult coloring book publishing have taken the same path, and travel, fashion and even biblical coloring books such as Zondervan/ Haarper Collins’ Biblical Quotes Coloring Book have quickly made their way to book shelves.

About 400 Wynwood Coloring Books preordered through Kickstarter have been sold. Backers also received a set of 12 colored pencils designed by Orlandini.

“I hope to offer colored pencils at retail locations in the future and I’m thinking about future editions of the book too! We’re still at very early stages but that’s the idea,” Orlandini said. “It’s been a crazy but wonderful ride but now when things get stressful, I can just color in my own book.”

Diego Orlandini, 4 years ago 1 min read
In the Media

Diego Orlandini, 4 years ago 4 min read
In the Media