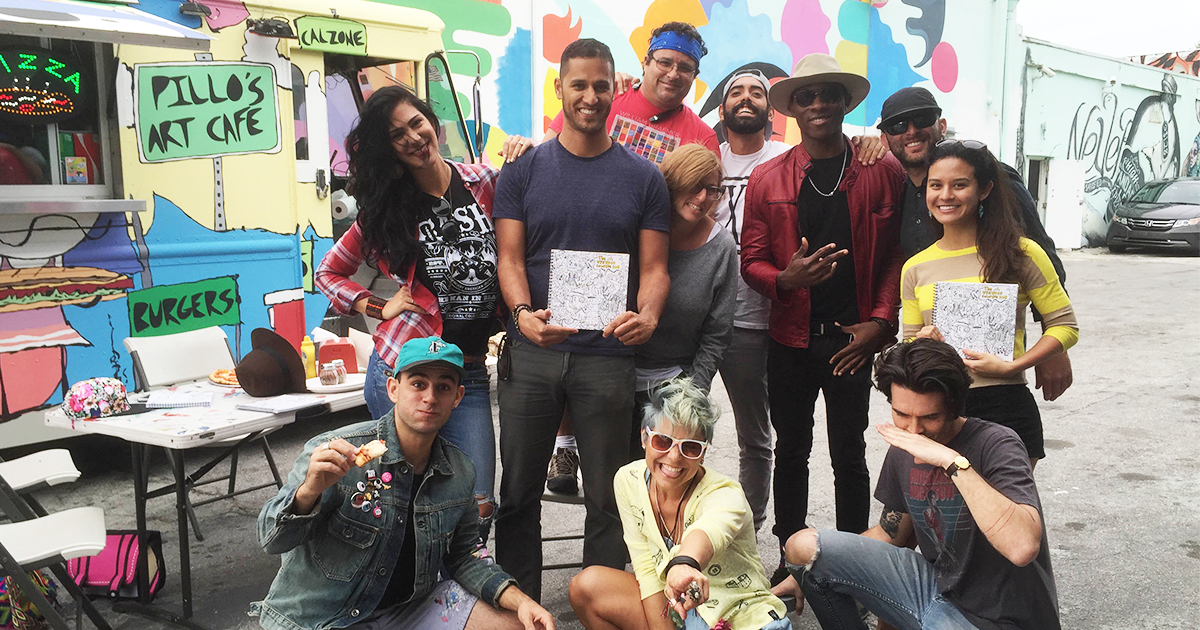 Diego Orlandini sits in the corner of a white leather couch in the center of the HGAB magazine headquarters in Wynwood. He leans back and crosses his legs. Beneath his left hand lies a mockup of a black-and-white book with what appear to be doodles on the cover. Thick yellow bubble text reads, “The Wynwood Coloring Book.”

That’s right — Orlandini has created a coloring book for adults by taking the murals that adorn the streets of Miami’s arts district and turning them into colorless sketches.

The craze of adult coloring as a way to release stress is relatively new, with researchers and therapists confirming the calming benefits. Barnes & Noble has tables full of them, and even Warner Bros. will release five Harry Pottercoloring books targeting the franchise’s older fan base by summer.

Orlandini had the idea for The Wynwood Coloring Book last summer, when his now-former girlfriend gave him one to try. A few months later, in October, he felt inspired and got to work. While walking through Wynwood and looking at the street art, he thought, It would be so cool to be able to color these murals myself.

“I started reaching out to artists and trying to convince them to join this crusade,” the graphic designer says.

After contacting a few muralists, Orlandini was hopeful but unsure. “At first, I didn’t know what was going to happen. But it was amazing how quickly they responded and how for-it they were.

“For me, it was very important to properly represent the artists’ work, so in a way, I’m sort of making this book for them.” Over time, the murals get painted over by other works, but with the coloring book, they remain alive. In a way, Orlandini sees the eight-by-eight-inch book as an ambassador of Wynwood as it makes its way around the world and shows outsiders what’s hidden in a former warehouse district in Miami.

When he began the project, he didn’t know much about the local and international artists whose works cover the streets, but now when he walks around, he can name the painter of nearly every mural.

The selection process was pretty simple: He chose the artists whose murals he liked. From there, he created a proof of concept to send them, and once permission was granted, it was like popping the top on a fresh can of spray paint.

IF YOU LIKE THIS STORY, CONSIDER SIGNING UP FOR OUR EMAIL NEWSLETTERS.

Orlandini also wanted his book to have variety, so he made sure to include intricate pieces with thin lines alongside works with thick lines and large, easy-to-color spaces.

The first edition of The Wynwood Coloring Book features more than 40 artists and is already in the final production phase. Featured are recognizable street arts such as Diana Contreras, Alex Senna, The London Police, Jenny Perez, GG Art, and Patch Whisky. But Orlandini has since been contacted by an overwhelming number of people wanting to be included in the next book. “I see this having multiple editions,” he says with a smile.

Stay inside the lines with 'The Wynwood Coloring Book'

Diego Orlandini, 3 years ago 4 min read
In the Media