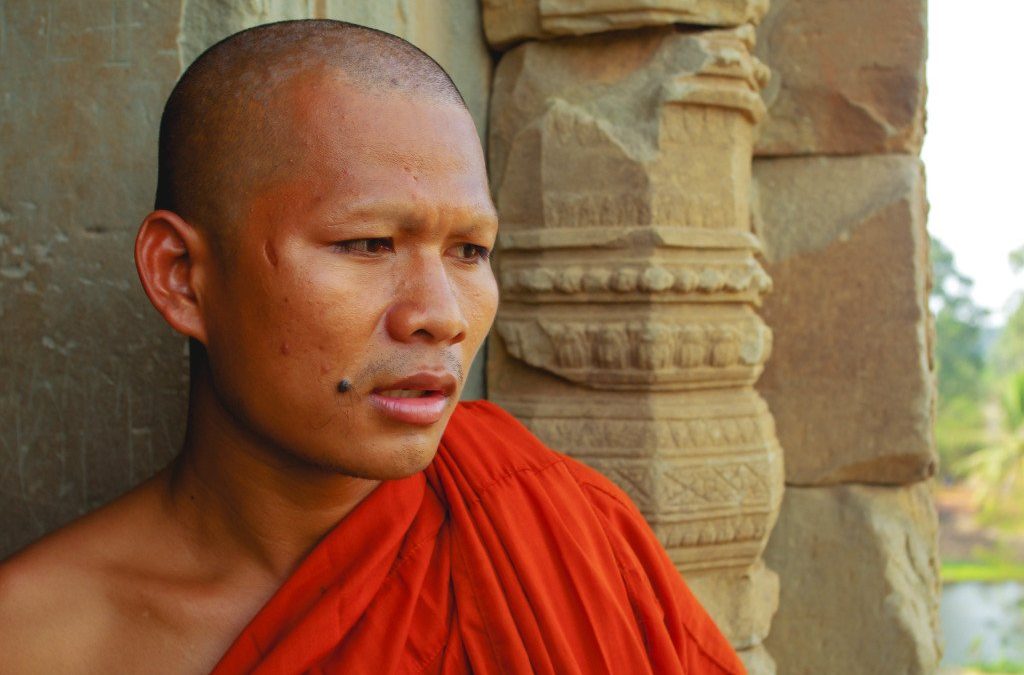 Spirituality for Assholes: A Millennial’s Guide to Clarity

A few years ago I landed in a rice field on the outskirts of Siem Reap, Cambodia in Southeast Asia. I was traveling aimlessly around the world with no purpose, no intentions, and truth be told, no motivation. I bounced from one town to another, not sure why I was traveling, or where I would go next. Unknown to me, at the time, I began a journey of self-discovery that would last a few years.

Cambodia is a Buddhist country. Afflicted by one of the worst genocides in modern history, Cambodia is also extremely poor. The Khmer Rouge, a communist dictatorship that held the country hostage for the last half of the seventies, enforced their rule by wiping a fifth of the population. 1.7 million people lost their lives. The people massacred were mostly professionals, doctors, journalists, village leaders, teachers and, of course, monks.

I was in Bangkok drinking my life away at one of those bars on Khaosan Road and sleeping at an eight-bunk-bedroom in a backpacker’s hostel, when I met a Dutch guy who radiated light.

I was shocked. I was borderline scared at how happy he looked. He was so at ease with himself. His eyes were pure and honest. He had returned from Siem Reap, he told me. In Siem Reap, he built a classroom with his bare hands for a grassroots school in a rice village. The classroom accommodated roughly three hundred children. A Buddhist monk was the founder of that school. And that school needed English teachers. Naturally, the Dutch man encouraged me to go. He told me he learned meditation while he lived with the monks. It sounded interesting since my experience with meditation, or anything spiritual for that matter, amounted to passing out at the dry end of a beer bottle, or hitting on some girls in pink yoga leggings.

The Dutch man gave me the address, the contact information of the monk, and a pat on the back as he wished me good luck before he left for the airport; dirty backpack in tow. I never saw the man again. I thought about what gain I could get out of going to that school and I concluded that learning meditation would be a decent reward. I had nowhere else to go, after all.

The next day, however, I joined other travelers instead. I joined people who were just as trashed and confused as I was, and we went to the islands in the south where the parties, drugs, and sex came easily and cheap. It was a good place to forget.

A few weeks passed, and I could not shake off the image of the Dutch man who exuded light with his dorky smile. In one of those moments where you are so far down into the bottom that there is no other place but to go up, I booked a flight back to Bangkok, spent the night in a lavish hotel room in the arms of a beautiful woman, and the next morning I departed to Siem Reap. I was determined to find this monk, his school, and the freaking reason this Dutch man was so damn happy.

I took a long train ride, followed by a one-hour taxi ride that I shared with a couple of Brits who generously offered me a place to crash in their hotel room. The next morning, we had a plentiful breakfast of toast and coffee with a copious amount of fruit. “Come with us,” one of them said. They invited me to join them on a boat cruise down the river to Phnom Penh, the Cambodian capital, and from there to Sihanoukville, an infamous beach in Cambodia. That beach was affectionately called Sin-ville. It wasn’t an overstatement.

“We will party like animals,” said the other. Temptation was calling. Women, booze, free drugs, friends and a yet another easy escape was knocking on my door again.

I thanked them for the offer, said my farewells, and with terror in my heart, fear in my veins, and the type of anxiety that comes with being utterly and profoundly alone, I jumped into a tuk-tuk and asked the driver to take me to the rice village where the monk lived.

The driver drove for almost one hour. He was just as skeptical as the British guys. I was equally puzzled at my decision, but I was determined to follow through with it. At every turn of the dirt roads, which became increasingly irregular at every bump, he slowed down, turned around and asked me, “are you sure about this?”

And at every turn, I forced myself to respond, “yes, I am sure.”

I met the monk a few hours later. The tuk-tuk driver, incredulous as he was, stuck around just to see my reaction in the off-chance that I would change my mind and would need a ride back to the town. There was nothing in that village. Drylands, some farm animals, and a few houses every hundred yards. The monk showed me the facilities. They consisted of no more than a four-room shack that could crumble at the next monsoon, the farmhouse where the impoverished family who owned the land lived, and an outhouse. My bed was a plank of wood covered with a bamboo mat.

During the following weeks, I improvised English classes for about fifty or sixty children who were loud, obnoxious, and full of life and rotten teeth. They loved me even when I had nothing to offer them. They loved me freely and for no reason. I made up my English lessons as well as I could and without any formal teaching education. And so did the monk, I presumed. Other volunteers trickled down from time to time.

In the evenings, after a humble dinner of rice and veggies and an occasional piece of meat, if we were lucky, under a weak yellow light that illuminated the buzzing mosquitos, we sat on the wooden platform that doubled as our studying lounge, and the monk taught us to meditate. Needless to say, I was a young, impulsive, ignorant, and arrogant man forcing myself to learn meditation from a man whose religion, convictions, and way of live incorporated meditation as if it was the air he breathed. In a way I was a worse student than Daniel LaRusso learning martial arts from the old sensei in Karate Kid. It didn’t work.

I left soon after and continued with my rampage through South East Asia. In the process, I learned a few more things.

I returned to the village a few months later. I thought I could offer my help to the school one last time while I was in Southeast Asia. I wanted to produce a promotional video to help the monks raise funds for his school.

While shooting the video, the monk and I scouted various places to use as a background. I helped him craft his story, find the right words, and eventually tell it to the camera. In the process, I learned more about him. I realized that the first time I was in the village I didn’t bother to learn who he truly was. My second time around I tried harder.

He was the son of a single mother who lived in the neighboring village. He had joined the Buddhist monks as it is customary for many young males of limited resources in Cambodia. It’s a life that offers some stability and certain security, albeit utter poverty. Also, to be a monk is a great honor for the families of the chosen men. Monks are revered and treated with respect. The highest respect I have ever seen. In fact, in Buddhism, to help a monk, to feed him or to offer him shelter, is considered good karma. It’s great karma. It’s the mother of all good karmas.

The monk’s life consisted of praying, chanting, meditating, taking care of the temple, and in the afternoons he ran the school he had created. He was not only the only teacher for all these kids, but he was also the administrator, treasurer, and recruiter. He saved all the donations and alms he collected and whatever else he could scrap and he used it to pay for the school expenses. He also scouted the town on the weekends to find foreigners and English speakers to volunteer at the school. He also studied English at the town’s university. He was a busy man. He was a busy monk.

On my last day there, we walked around the school. I showed him the finished product: a two-minute video clip with special effects, and nice transitions. He was happy. I was happy. He confessed to me that he was tired. Clearly, he needed more hands. The volunteers were great, but they only stayed for short periods of time. There was so much he needed to do, and he could not fulfill all of his roles properly. In a way, he was an absent monk and an overworked school director.

“It sounds like you have to choose what your priorities are,” I told him. “What’s more important to you?” I added jokingly. “To reach enlightenment or to help some kids?”

We said goodbye, and I continued farther into my travels around Asia. Months later, back in America, I received a message from this man.

He was no longer a monk.

He had abandoned the robes to pursue his true vocation: to educate the three hundred kids in his village. His decision was received with great joy (and I am sure, some sorrow as well). The village threw him a party. Rice cake was eaten. And he began his life as a layman.
A year later, the school opened up a second location in the neighboring village where his mother left him a piece of land. Now the school serves over four hundred children. I still help them from time to time.

Life is a collection of decisions. Life is about making choices. Some are easy; some are tremendously difficult. Some alter the course of your life. Some are bad, and some are good. Some are even great. I heard that he dated a girl. He even traveled a bit. The kids are happy. I am sure they love him as much as always. And the last I heard from him, he was finally living the life he was meant for.

I cannot help but think that sometimes life presents you with a difficult decision. Sometimes you have to choose between two things you love. These are perhaps the most difficult ones. In his case, he had to choose to abandon who he was to become who he needed to be.

Are you brave enough to do the same?

Sometimes I wonder: If helping a monk is considered good karma, what happens when you convince one to abandon the robes? How many years of bad karma is that?

Oh my Buddha, what have I done!

9.4
Spirituality for Assholes: A Millennial’s Guide to Clarity

On How to Yield a Sword